Cyclists Are Literally the Worst 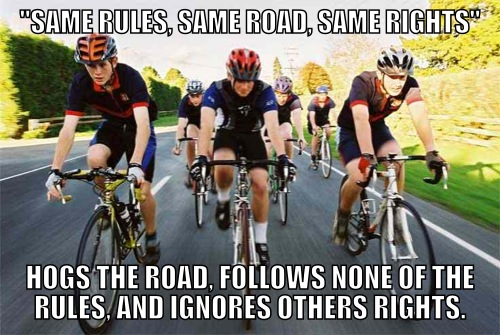 I realize that the title is a bit inflammatory, but after having a very unpleasant altercation with a cyclist while walking to class this morning, I have to vent my frustrations. Let me ease some of the tension by qualifying this statement: many cyclists are perfectly fine individuals with whom I have no quarrel, but just as many are aggressive, self-righteous jackasses who deserve to have their riding privileges revoked.

Allow me to elaborate on my encounter. This morning, at approximately 10:20 AM I was on my way from my apartment to Northeastern University for my first class of the day. Due to the absurd amount of precipitation that has befallen the city of Boston in the last few weeks, the path that I take to class had become very icy. This route consists of a bike path and a walking path that are parallel to each other. Upon realizing that the stretch of walking path ahead of me was much icier than the bike path, I chose to look behind me quickly, and cross over to the bike path side, seeing as to how it was not busy. I courteously stayed to the right hand side of the path, leaving approximately 10 feet of space on my left for any cyclists who happened upon me to pass safely. The large, extensively hairy gentleman walking ahead of me on the bike path, who looked a bit like the guy from Lost, was also thoughtfully staying out of the way.

Enter: Asshat. A blur of black and red flies by me on the left with no prior warning, startling me a fair amount and causing me to reflexively clench my buttocks. He proceeds to coast up to the crosswalk ahead, and stop to wait for the walk symbol. As my furry companion and I catch up to him, attempting to walk by on the small, icy sliver of sidewalk he left us behind his bike and his massive ego, he decides to tell my compadre that “the bike lane is for bikes only, use your brain next time!” As I pass him, he says “you too, asshole!”

This is what set me off. Instead of just riding on by, accepting the natural right of humans to walk wherever they please that is safest and most preferable to them, he has to make an ass of himself and of all other bikers. I told him to “have a nice day” (or something along those lines), and he proceeded to tell me to “have fun going to class in the 70s,” presumably a comment on the leather jacket I was wearing. Then he sped off when the light turned and promptly turned back and gave me the finger.

Now, I understand that commuting on a bicycle is a healthy, environmentally-friendly way to get to work, and that cyclists are often passionate about their hobby. I also understand that cyclists, generally moving at a higher rate of speed than pedestrians with little to no bodily protection, are at a higher risk of injury from cars or falling. But for the love of God, if your method of dealing with this passion and insecurity is being a general ass wipe to the people around you, then you deserve to be hit by the bus.

Driving in the city, I am constantly surprised by cyclists darting out from behind stopped cars in traffic, speeding across crosswalks at busy intersections while the light is green for cars, and lane splitting like they own the road. They ignore red lights, expect cars to slow down dangerously when they’re around, and even ride on sidewalks from time to time to get to their destination faster. If you do this, I hate you.

When you’re on the road, or more importantly on public walking and biking paths, respect the rules of the road, and be a courteous commuter. The fact that you ride a bike to work is no excuse to be a prick to people who are trying to get where their going via other modes of transportation. You are very near the bottom of the transportation food chain, and you should conduct yourself accordingly. Respect everyone on the road, and maybe, just maybe, I and everyone else can begin to respect you.