Welcome to the latest installment of HUUCBOTW, where the cars are actually more reliable than CNN’s reporting. This week, we turn our attention to the greatest country in the world: this one! (Results may vary).

Is there anything more American than squeezing ridiculously pitiful amounts of horsepower out of oversized, lethargic engines? If you answered no… then you’re wrong! The answer was “over-enthusiastic misguided patriotism.”

However, seeing as this is a car-related website, let’s just pretend the first answer was correct.

This is not the first time we’ve revisited the late 80s and early 90s, and while our friends in Japan were starting to get things right again with their cars, America was still getting things horribly, disastrously wrong. But amongst all of the angular turds we were churning out, there are still some cars from this era that are loved by both enthusiasts and dudebros alike. And today, we get to look at two of them! Yee haw!

So fire up your walkman, turn on some Full House or Family Matters, and take the poll at the end to pick your favorite American “muscle” car! 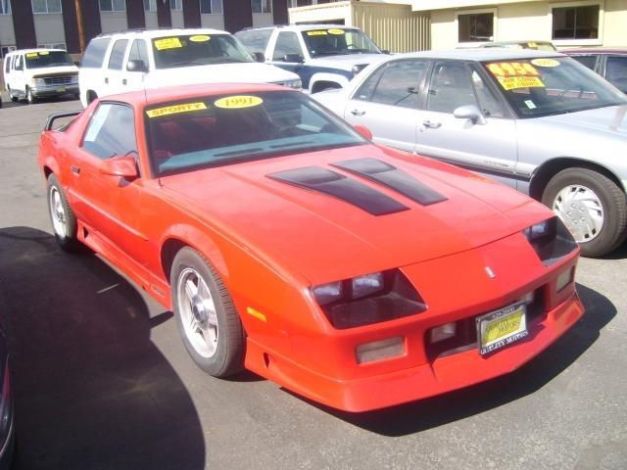 The all-knowing Jeremy Clarkson once dubbed this generation of Camaro “a murderer’s car” when he purchased one to drive through the Southern US, and I don’t think a more fitting description has been devised for anything else ever. But with every dark cloud, there is a silver lining: the Z28 is a fast murderer’s car!

Of course, when I say “fast” I mean “faster than the RS version” which was about as quick as getting a bill through Congress. This 1991 Z28 comes with a 4-speed automatic (booooo) and a 5.0L V8 pushing out 170 horses when new. Bearing in mind annual horsepower depreciation and many murderous miles, it probably puts out the equivalent of one horse’s leg today.

23 years ago it hustled to 60 miles per hour in 9.5 seconds, which leads me to believe that many previous owners are now behind bars for unsuccessfully attempting to flee from the law.

Being an American car from any time in, oh I don’t know, the past 100 years, it has a lot of rust issues. But thankfully, parts are easy to come by and a few simple upgrades can turn this Z from sleepy to sleeper without breaking the bank.

To see the Cars.com ad for this car, click here.

I’ve always been a Mustang guy, but I’ve got a bit of an issue with the Fox Body. Fanboys will go on and on about how it’s light, cheap, relatively powerful, and “comparatively good looking” for the time period. But they’re all wrong… it’s downright hideous. I mean, it looks like they completely forgot to integrate headlights into the design, and when it came time to present the prototype to their bosses, they said “dammit Jerry, get me a saw and the headlights from that Taurus over there!”

But despite its complete lack of show, the 5.0 had a decent amount of go for its time, pushing out 205 horses. And best of all, it’s a liftback! So much more room for activities!

Fanbros are quick to mention that they’re cheap to maintain and upgrade and are capable of putting out irresponsible amounts of horsepower and noise. Nothing quite like giving some pensioner a heart attack as you peel out of the Walmart parking lot, is there?

What they won’t tell you, however, is that upon cornering the Fox experienced about as much body roll as Bring It On: All or Nothing. Don’t ask me how I know this, it’s not important.

To see the Craigslist ad for this car, click here.

Which one would you have? Take the poll and let us know!