The Volvo Concept Estate Is Everything 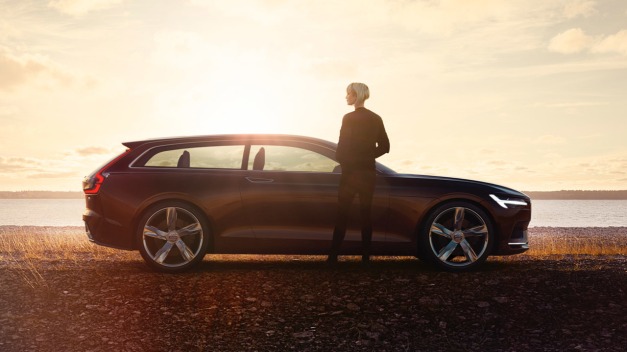 When will Volvo give us a chance to breathe? After making us swoon with the stunning Concept Coupe and Concept XC Coupe released just months ago, our fair-skinned friends from the great Scandinavian phallus drop this bombshell on us.

It’s no secret that Volvo has been struggling as of late. The Swedish carmaker, famous for it’s safe, reliable, boxes driven almost exclusively by hippies, moms, and tweed-laden professors, is butting heads with it’s new Chinese parent company, Geely. The Chinese overlords want Volvo to compete directly with Mercedes and BMW, but Volvo would rather stick to its quirky, meatball and lingonberry roots, and stay loyal to its customer base. But regardless of whose vision is better, Volvo is still bleeding out profusely. Their sales slipped from 140,000 vehicles in 2004 to around 60,000 in 2013.

But this beautiful brown shooting brake, the third and final concept in Volvo’s new design studies, is a beacon of hope that maybe things aren’t so bad after all. In fact, they’re drop-dead sexy.

Thomas Ingenlath, Senior VP of Design at Volvo, is responsible for all three concepts, and this is the pinnacle of his work. It represents a new direction for the ailing brand, and it’s a strong return to many of the qualities that have made Volvos desirable to so many for so long. It is clearly a modern interpretation of the fantastic 1970s P1800 ES Shooting Brake, but possesses so many characteristics that point to an exciting future.

The t-shaped LED headlights are as strong a signature as Thor’s Hammer (I really hope that was the inspiration behind them), and the taillights are distinctive, elegant, and strictly Volvo. I think the panoramic glass roof is one of the best I’ve ever seen, because it looks essential to the design of the car, not simply tacked on to illicit oohs and ahhs from people who presumably haven’t looked up at the sky before.

But as elegant and distinctive as the exterior is, the interior is even more promising. Volvo says that this interior design language is essentially a direct preview of things to come, and if so, me likey. The center touch screen is well placed and sized, and is integrated seamlessly into the flow of the dashboard. Nothing is outlandish and terribly bold, but everything is ergonomic, sleek, and practical, as we’ve come to expect from the nation famous for IKEA.

Perhaps this is a sign then that Volvo is alive and well and poised for a roaring comeback. They have clearly put the right people in charge of design and brand identity, and assuming they stick to their roots and soldier on, it’s safe to say they have a future as bright as summer in the Arctic Circle.

Now if you’ll excuse me, I need to lie down on my couch for a minute. And yes, I bought it at IKEA.